Gloria Lee is the Client Relations Partner for Rutan & Tucker, LLP, one of the largest full-service law firms in California. She is the only Korean-American partner and Chair of the Firm’s Business Development Committee. She is an award-winning commercial real estate attorney and in 2017 was named by the California Diversity Council as one of Southern California’s “Most Powerful and Influential Women.”

Ms. Lee graduated with distinction from Stanford University and earned a BA and MA concurrently in four years while playing for the three-time national champion badminton team. 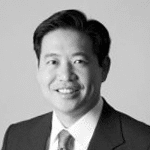