In Memoriam: CKA Honors the Life of Dr. Myung-Ki Hong

In Memoriam: CKA Honors the Life of Dr. Myung-Ki Hong 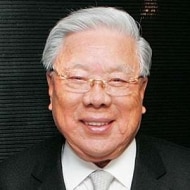 The Council of Korean Americans (CKA) honors the life of pioneer, philanthropist, and mentor, Dr. Myung-Ki Hong. We share our condolences with his family, friends, and the hundreds of people whose lives he touched.

Dr. Hong was an inspiration to many in the Korean community, particularly in his adopted home of Southern California. Born in Seoul, South Korea, he earned his bachelor’s degree in chemistry from the University of California – Los Angeles in 1959, the first Korean to do so. He later established his own company, Dura Coat Products, Inc, which would have worldwide reach.

He was committed to promoting community engagement and education. After the 1992 Los Angeles riots, he worked to promote community engagement and political participation by the Korean American community. He established the Bright World Foundation, renamed the M&L Foundation, to promote opportunities for Korean American youth and support communities in California. He also made numerous contributions to area universities, including the Young Oak Kim Korean American Research Center at the University of California – Riverside. He also established the Dr. Myung Ki Hong Endowed Chair in Polymer Science and the Dr. Myung Ki Hong Endowed Chair in Materials Innovation at the Department of Chemistry and Biochemistry at UCLA.

Dr. Hong chaired the Dosan Ahn Chang-ho Memorial Foundation and led campaigns to honor the memory of this important Korean and Korean American leader, including constructing a statue in Riverside, California. He also served as Chairman of the Korean American National Museum in Los Angeles and led efforts to build their permanent home, opening in 2022.

CKA honored Dr. Hong for his achievements, generosity, and support for telling the story of our community at our 2016 Gala. His life exemplified the resilience, hard work, sacrifice, and entrepreneurial spirit of many pioneering immigrants of his generation. He demonstrated the importance of honoring our history and supporting those in need. We hope Dr. Hong’s legacy will serve as an inspiration for the next generation of Korean American leaders.