Korean Americans on the Partner Track in Hollywood 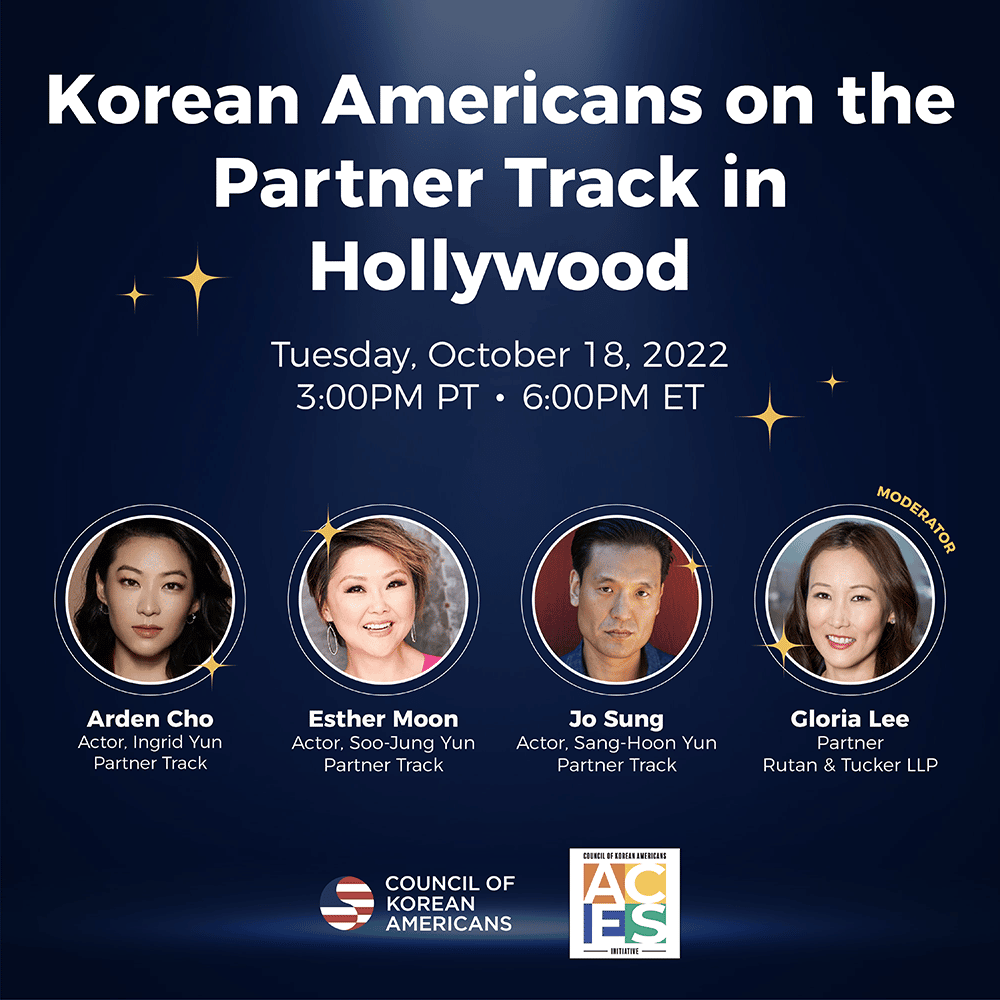 Korean Americans on the Partner Track in Hollywood

Join us on Tuesday, October 18 at 3 PM PT / 6 PM ET for an intimate virtual discussion with Arden Cho and the Yun Family!

A special thank you to CKA Board Member Gloria Lee for making this program possible!

Gloria Lee is the Client Relations Partner for Rutan & Tucker, LLP one of the largest full-service law firms in California. She is the only Korean American partner and Chair of the Firm’s Business Development Committee. Gloria serves on the public company board of Hanmi Bank and is also the Co-Founder of Kwell Laboratories and a Venture Partner of Ethos Fund, a tech fund with a focus in Southeast Asia.

Actress, singer, producer, and entrepreneur, Arden Cho is rapidly emerging as one of Hollywood’s most sought-after talents.

Cho can currently be seen starring as quick-witted lawyer Ingrid Yun in Netflix’s ‘Partner Track,’ which was released on August 26th and was in their top 10 most-viewed series for three weeks. Her other film and tv credits include Teen Wolf, Chicago Med, The Honor List, and Stuck. She has also released original music which she toured across the world performing, launched consumer businesses, and has been the face of international campaigns.

Born in a small town in Texas, Cho rarely saw anyone who looked like her on-screen and decided to change things. At the heart of everything she does is a dream that Asian Americans, especially females and the younger generation, would be more equally and favorably represented.

TV and stage actor Jo Sung portrays Sang-Hoon Yun in Partner Track. Previously, he depicted Zhou in the last season of Hawaii 5-0 and Pak Jung Soo in Magnum PI. On the stage, Jo is known for his roles as Ben Sullivan for the LA production of Anatomy of A Hug, Takehiro in Rashomon, and has taken part in many experimental productions by the Alliance Residents Theatre, American Harlem Theatre and PlayTime Productions.